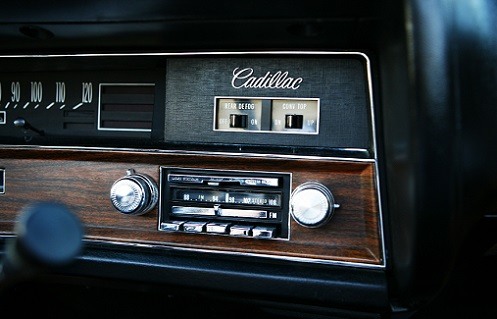 At some point in time, somewhere between the departure of Hannah Montana and the arrival of Miley Cyrus, my kids got the mistaken impression that I am their DJ.

We haven’t even begun to pull out of the driveway when listener requests start to pour in from the rear of the car.

It’s bad enough simultaneously playing the role of taxi driver and referee, but to add DJ to the mix is where I draw the line. Parenthood involves many sacrifices, chief among them a good night’s sleep, uninterrupted trips to the loo, and quiet car rides. But it does not mean giving up Johnny Cash for some Katy Perry.

When carpooling, my kids’ friends find it completely foreign that their radio requests are swiftly and unequivocally denied. I steal a glance through the rearview mirror and find their faces filled with puzzlement. Perhaps it’s because they’ve yet to hear “no” from their parents during the course of their entitled lives, or perhaps their parents are just far hipper than I, singing along to Pitbull at the red light.

I am a few decades older than my children, though, so it stands to reason my taste in music lags behind by a few decades too. Truth be told, I’m just discovering the 2000s (Coldplay and the Killers rank as “new” to me).

When I was on the other end of that carpool, one of a throng of kids packed into the back of a station wagon in the 1980s, I don’t recall our parents catering to our musical stylings. Mom was the easy-listening type, with KISS 100 exposing us to an ongoing cycle of Rod Stewart, Dionne Warwick, and Whitney Houston. To this day I cannot hear “Total Eclipse of the Heart” without thinking I am in the backseat of a station wagon on the way to a dentist appointment. Thanks, Bonnie Tyler.

If Dad was behind the wheel, chances are the tape deck had a Bill Haley & His Comets or Glenn Miller cassette playing. Like it or not. And really, what was there not to like?

Such car trips were an unintended musical education, exposing us to artists and songs we would never voluntarily seek out. It’s not much different than the way a liberal arts education works, I suppose, which is why I take my role as musical educator of today’s youth very seriously.

Trapped in the car, my children are prisoners to their old man’s jukebox. Pink Floyd one day, John Denver the next — and never miss an opportunity to get both Beethoven and the Led out. Both rock.

Granted, that musical education can go both ways. In 1986, having just turned 11, I desperately wanted to tag along with my older brother to see Peter Gabriel during his historic So tour. Dad wasn’t having it, but fostering my love of music, he relented with one condition: “I’m going too.”

So it was that the three of us found ourselves in the second-to-last row of the Spectrum, where I discovered the true meaning of the word nosebleeds. I still recall Dad fist-pumping his way through Gabriel’s iconic “Biko” encore. As we left the concert that night, a Phillies game was just letting out across the street.

“Hey, old man!” someone hollered in our direction. “Who won?”

And so he was, receiving a musical education of his own. That is not to say his DJ rotation of Irish folksingers and Broadway musicals ever changed, which in part explains my love of both today.

While today I will occasionally concede to a Taylor Swift tune, it is more often the case that my musical stylings result in groans from the backseat. Should those hapless passengers complain too much, I reach for the radio dial. Raising their hopes, I deflate them by stopping at the first Hall and Oates song I can find. While I am not particularly fond of the duo, they are from Philadelphia, so the kids should know them. A liberal arts education, I say! We suffer through “Maneater” together.

Peter Gabriel comes next, and the Rolling Stones inevitably follow soon after, offering a valuable piece of advice for the chirping peanut gallery in the backseat:

“You can’t always get what you want …”