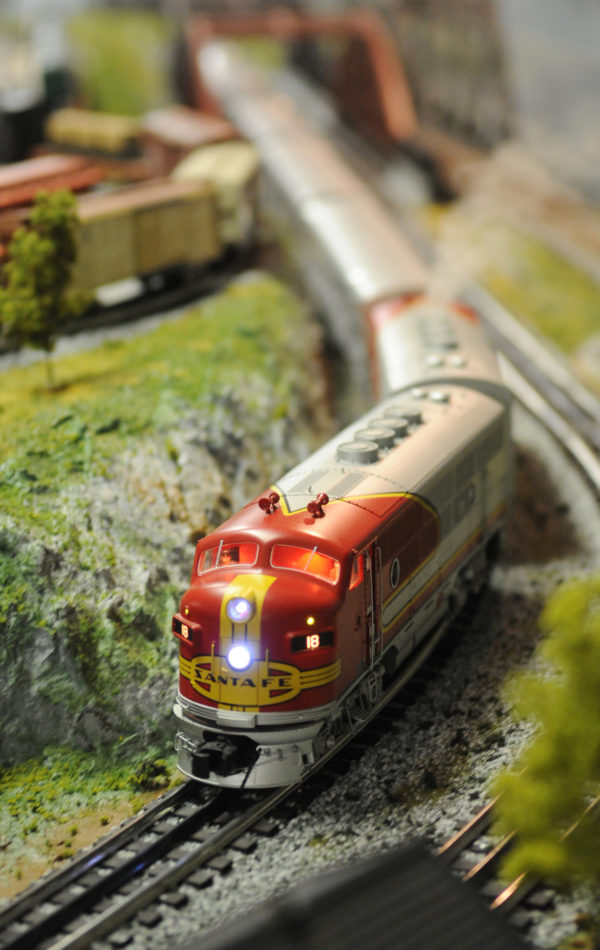 The burgundy engine hums to life with a subtle twist of the wrist, leaving behind fathers with suitcases and moms clutching the hands of children. Frozen on the platform, the tiny figures wait for a train they’ll never board.

The ride is corky smooth, over fields of green sandpaper and through snowy mountains with papier-mâché peaks. Orchard trees mix with tall evergreens. Boldly standing too close to the tracks, one tree is quickly uprooted and lies awkwardly on its side, a casualty of the passing Pennsylvania steamer.

Emerging from the picturesque countryside, the train descends into the valley and its town of lampposts, park benches, and stalled cars. Lights glow from the houses, church, movie theater, gas station, and hardware store. Townsfolk mill about; boys deliver newspapers; carolers sing; families skate on the mirrored pond. Some brave the cold to catch It’s a Wonderful Life at the drive-in. A nearby baseball field sits empty.

The tiny engine pushes on, past water towers, quarries, and factories; over trellis bridges and back to the station, where the dads with suitcases and moms with children still wait patiently. A quick engine switch, and the journey begins anew.

So it goes with the time machine that is the model train. No matter the engine – Conrail, Santa Fe, Union Pacific, and the rest – the train has the magical ability to stop time. Frozen in the moment like the motionless figures on the platform, the conductor is freed from the future so that he may enjoy the present while reliving the past.

Women often question the allure of the model train for grown men. (If you’re a female reading this, I commend you for getting this far.) But the attraction is quite simple. As boys, it was a hobby that allowed us to fashion our own world free of the busyness and silliness we witnessed in the one ruled over by adults. We lived in the moment, and hoped it would last forever.

I’m convinced that it all goes back to the book of Genesis and our desire to escape God’s world and create our own. On the first day, boy created the platform and laid the grass. Day two brought the tracks; days three and four, the mountains, trees, and ponds. The fifth was dedicated to villages and their frozen inhabitants.

But there was something missing. Boy was lonely. And so, on day six, he invented the model train.

Years later, we’re still trying to create our own world, a refuge from that busy and silly adult world in which we now live.

Sadly, our fantasies are typically relegated to a small plywood platform in a cold basement or garage – and even then, it’s often just for the month of December. After that, it’s time to pack up our world into cardboard boxes again. Life must go on.

Still, we’re happy to vanish to the place of our banishment, so long as we can turn that knob on the transformer, send power through those tracks, and bring an engine to life.

You see, day seven is our day of rest. Eve has her world, and we have ours. And God saw that it was good.